I found this recipe, titled something like “Deconstructed Turkish Dumplings,” in the New York Times over 10 years ago. Some time ago, the New York Times moved the recipe into its subscription content, and now I can no longer access it without paying. So, I rolled up my sleeves and tried to recreate the recipe from memory!

This recipe is inspired by Turkish dumplings, called manti. There are many variations of manti across the middle east and into Afghanistan (if not even further east). I am personally familiar with “mantu,” the Afghani variation, as there are several Afghani restaurants in my town. These dumplings are usually filled with meat or onions and always served with a dollop of yogurt on top! 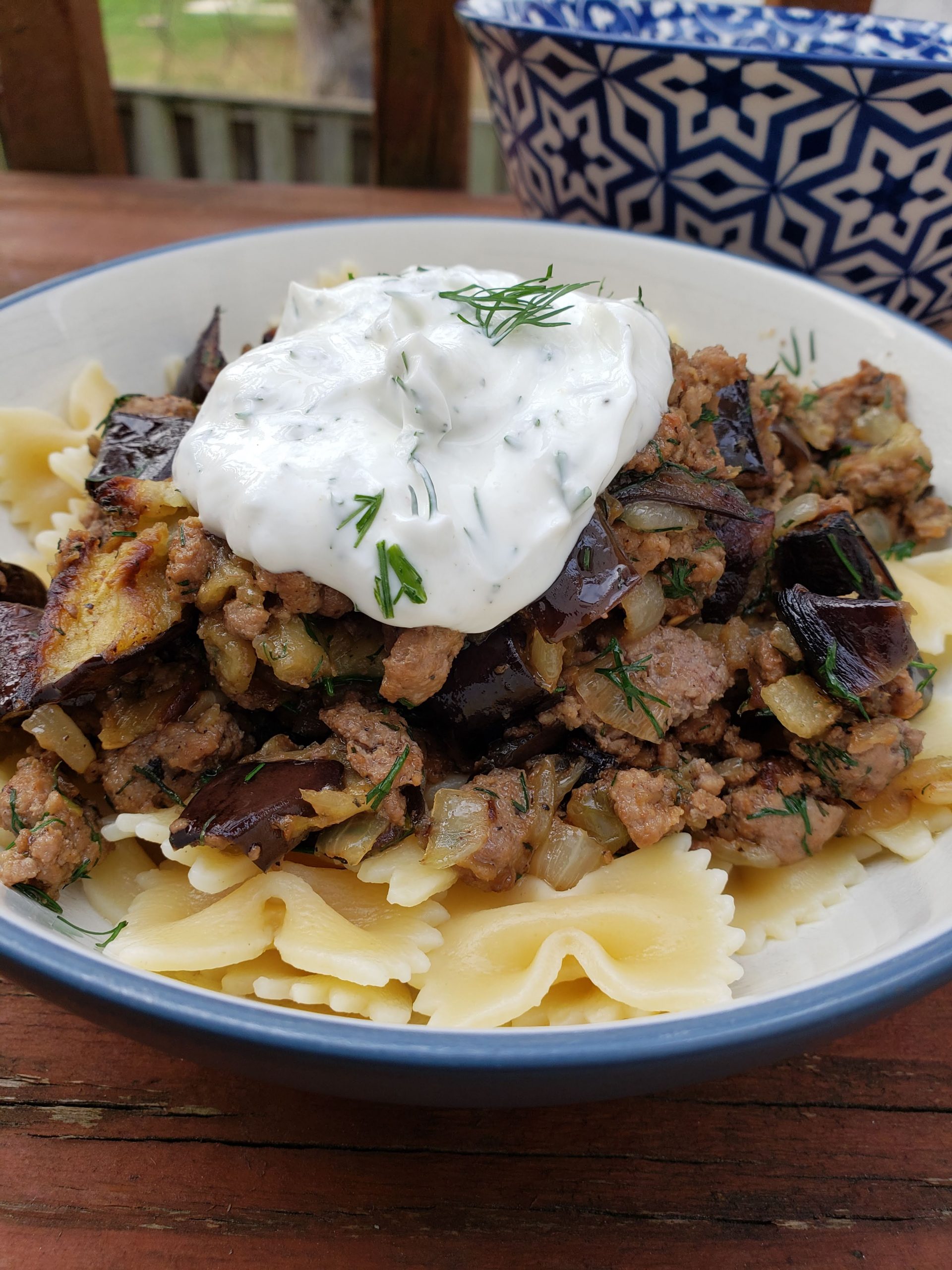 Dumplings are wonderful, but what a lot of work! You’ve got to make the dumpling dough, roll it out, fill it, then carefully cook it so that it holds its shape and the filling doesn’t all fall out. In this recipe, I use a wide pasta in place of the dumpling wrapper. I like to use farfalle because it looks fancy, but wide egg noodles work just as well!

First, I dice up my eggplant, toss it with some salt, pepper, and olive oil, and put it in the oven to bake for about 40 minutes. While the eggplant is roasting, I dice an onion, chop a bunch of dill, and mix some spices and herbs into some Greek yogurt. Then I sit down and relax for 20 minutes. At the 30 minute mark on the eggplant, I put a large pot of water on the stove and cook the lamb “filling” while the water comes to a boil. The lamb comes together quickly; I sauté the onions until tender, then add the ground lamb and season it as it browns. By the time the lamb is cooked through, the eggplant is about done. I add the eggplant to the skillet with the lamb and I toss it all together, allowing the eggplant to soak up the luscious fat from the lamb. Lastly, I add a handful of chopped dill and it’s done! Once the water comes to a boil, I salt the water and throw in the pasta, cooking it until it’s al dente (according to the package directions).

I love this recipe because, not only are lamb and roasted eggplant two of my favorite foods, but also, because there is time to sit and relax in the middle of preparing this meal! I truly prefer baking to cooking because there’s something so luxurious in having the smell of an amazing meal wafting through the house, all the while I, the chef, get to sit at the kitchen table scrolling on my phone, while the rest of the house assumes I am slaving away in the kitchen. And with a meal this good, no one will question that you weren’t toiling over the hot stove for that whole hour! 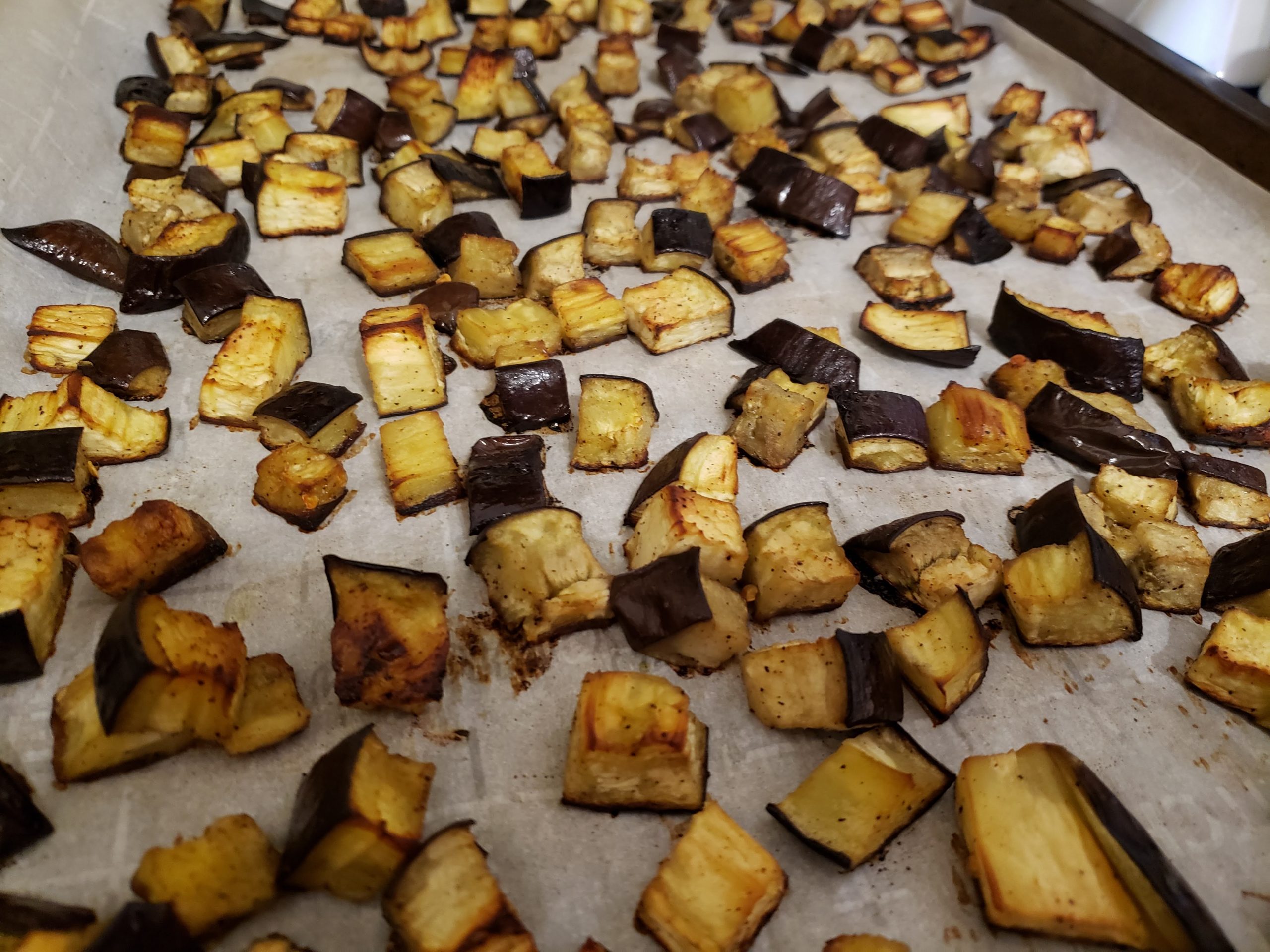 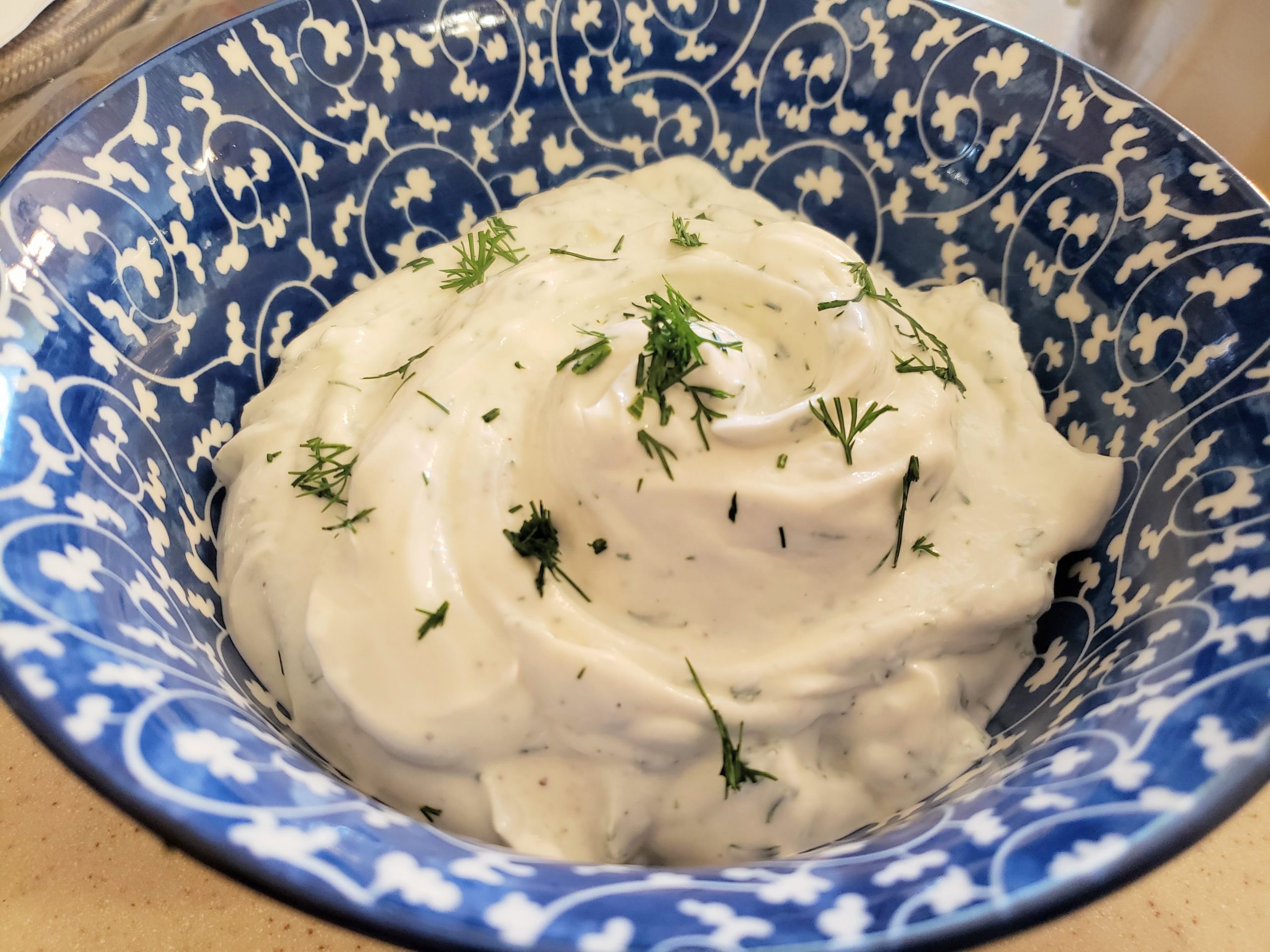 You might notice that this yogurt sauce is one of my go-to’s (you’ll find the same sauce in my zucchini fritters recipe 😉) Do not skip the yogurt sauce! The addition of the roasted eggplant with the lamb, gives a creamy mouth feel and the yogurt works to intensify that texture! I have used whole milk Greek yogurt and non fat Greek yogurt and I have to say that both make for an excellent sauce. I would opt for the nonfat if you’re trying to skim calories and I wouldn’t worry that you’re missing anything from the experience! 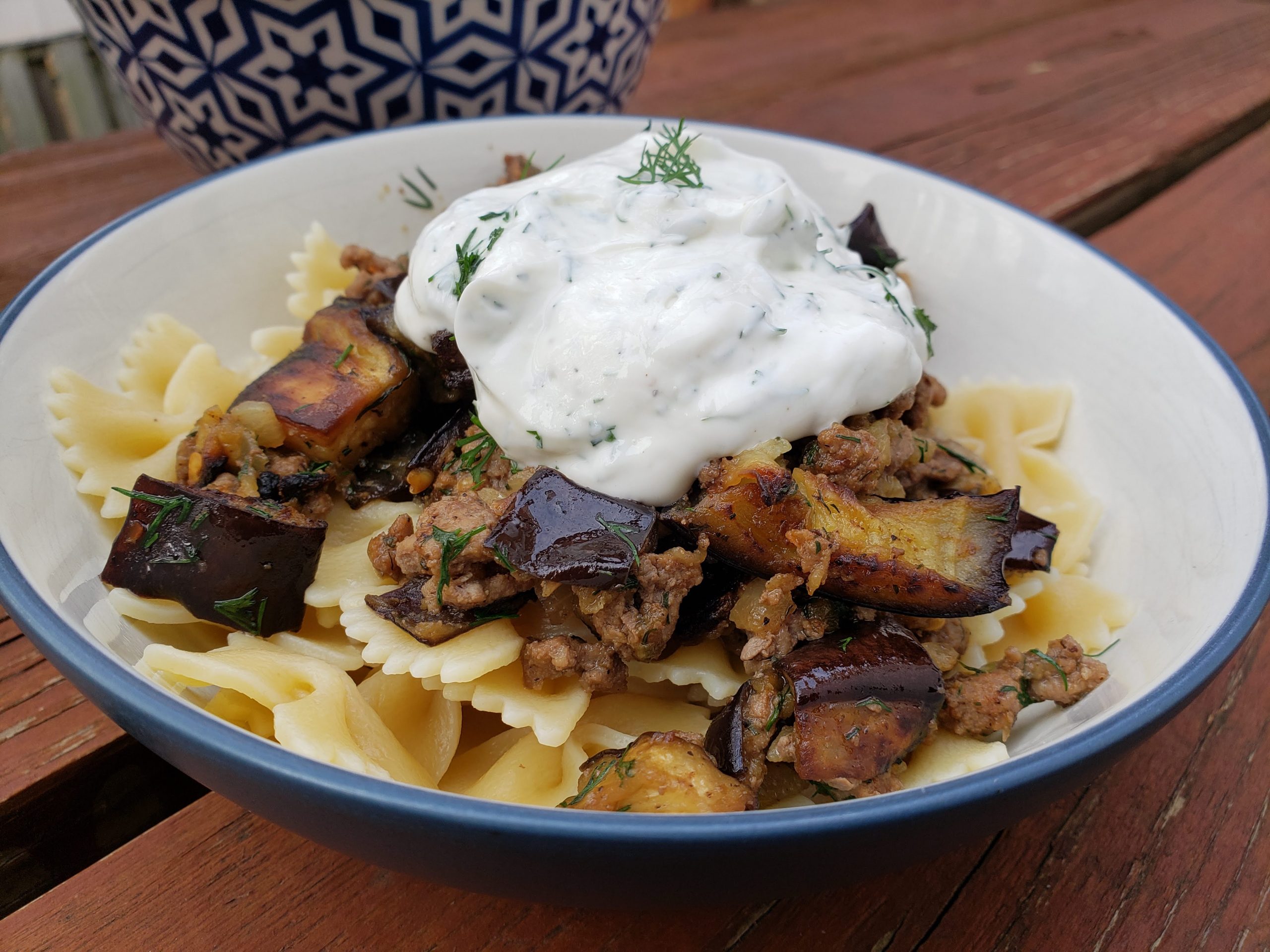 Ground lamb, roasted eggplant, and aromatic dill atop wide noodles, garnished with a healthy dollop of dill yogurt sauce vegetable broth if you like!

This recipe is inspired by Turkish dumplings, called Mantu!

Finely chop a large bunch of fresh dill. Mix the yogurt, salt, black pepper, garlic powder, and 3 Tbsp of dill together. Set the yogurt sauce aside. Save the rest of the dill for the lamb

Heat a large skillet on medium heat with 2 Tbsp olive oil. Add the diced onion and sauté until translucent (about 6 minutes)

Meanwhile, heat a large pot of water over high heat and bring to a boil

Add the lamb to the onions. Break up the lamb into small pieces and add the salt, black pepper, garlic powder, and red pepper flakes and stir until lamb is cooked through

Remove the eggplant from the oven and add it to the lamb and onions. Add a 1/4 cup of dill and mix well

Once the water is boiling, add 2 tsp salt to the water, then add the pasta. Cook pasta until al dente according to package directions, then drain

Layer pasta, then lamb/eggplant mixture, then yogurt sauce on top. Garnish with any leftover dill and enjoy!

Get the Latest Recipes! Join our newsletter.

Did you make this recipe? Have a question?

Leave a comment below – I’d love to hear your thoughts! 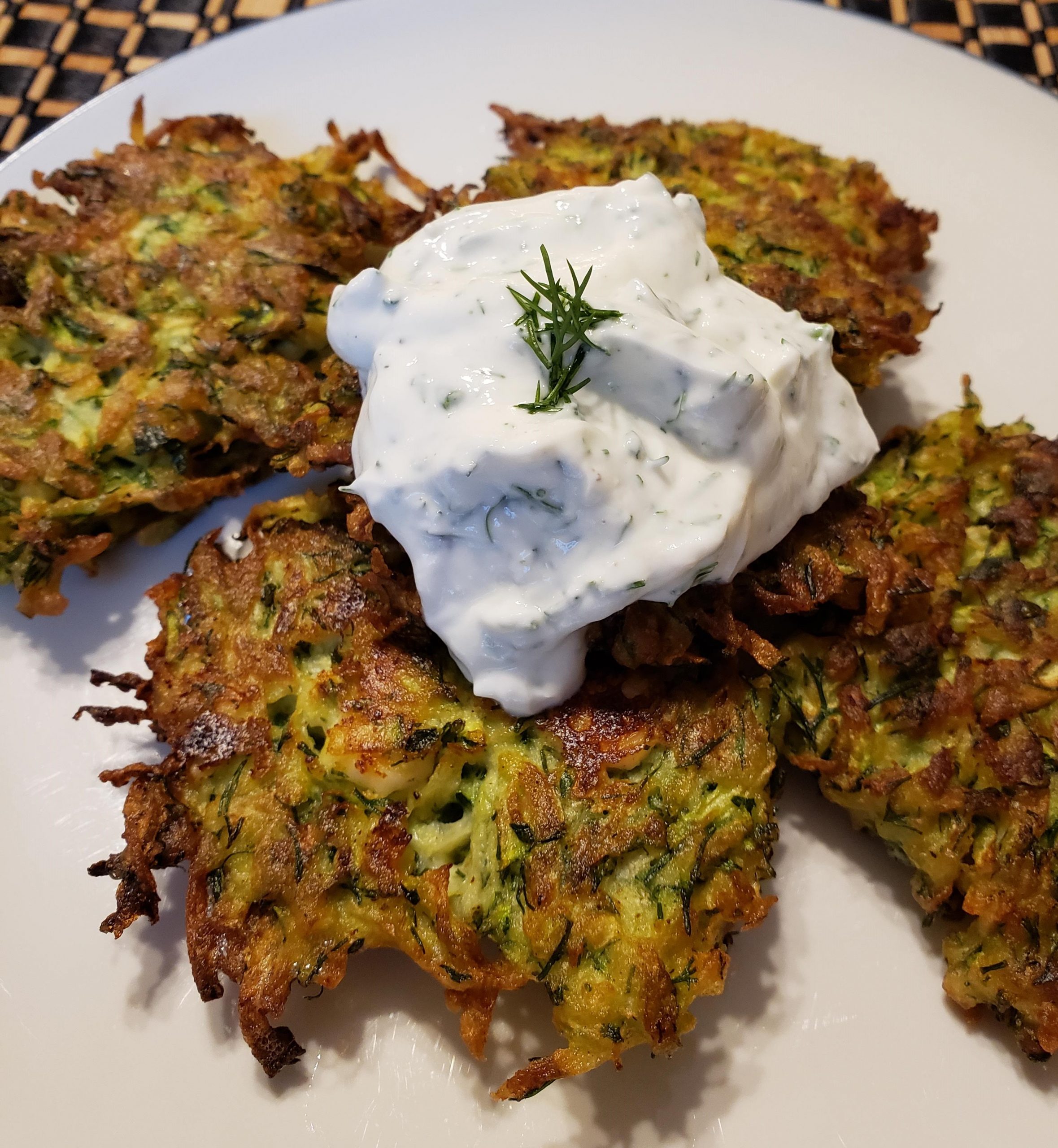 Packed with tons of zucchini goodness! Fresh dill enhances the fresh feel of these fritters and the feta cheese gives it some tang. 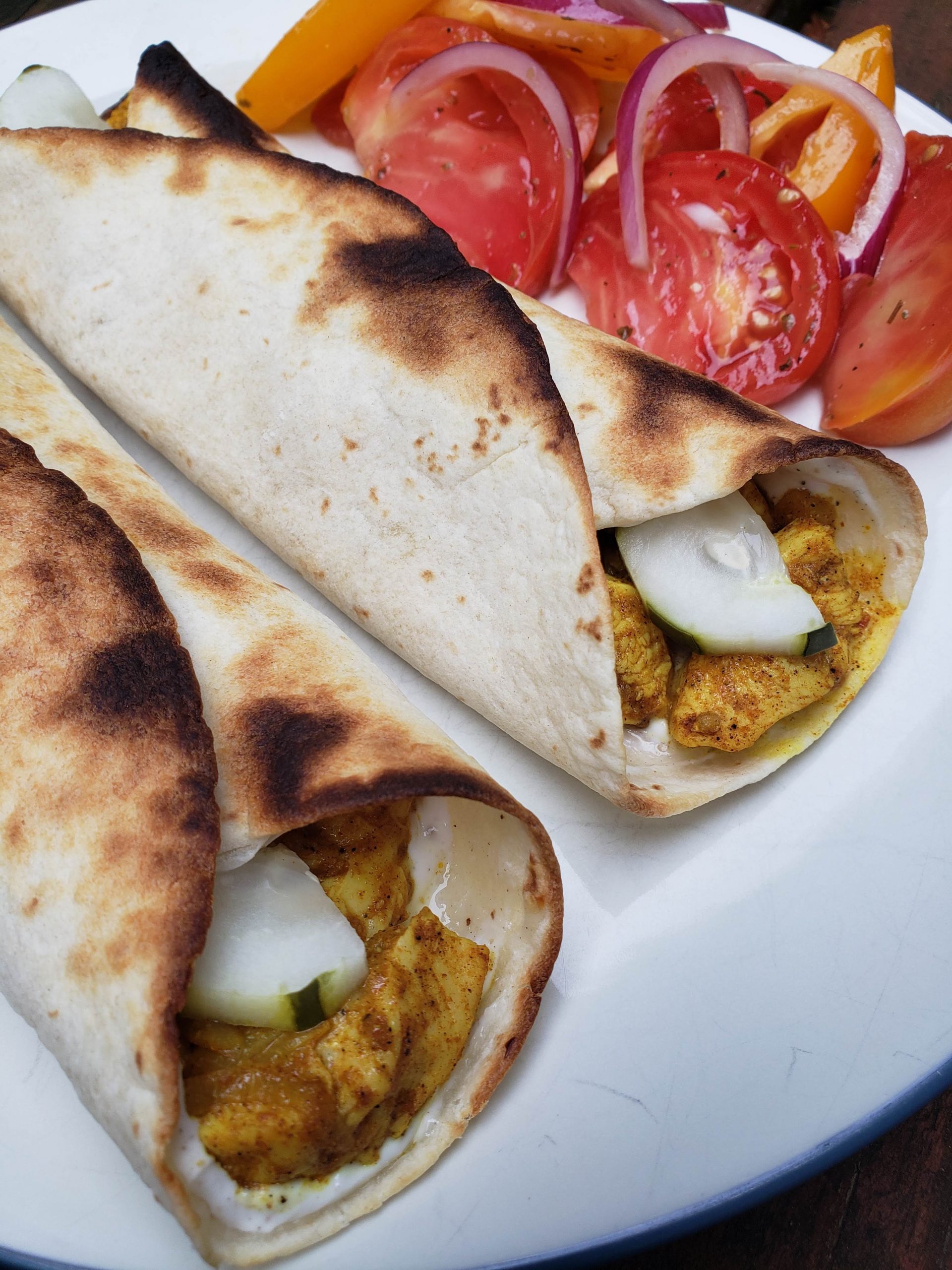 An Arabic-American fusion wrap. Developed by a Saudi woman who was craving shawarma but had to get creative with what she could find at her local grocery store here in the states. These shawarma wraps will have your kitchen smelling AMAZING! 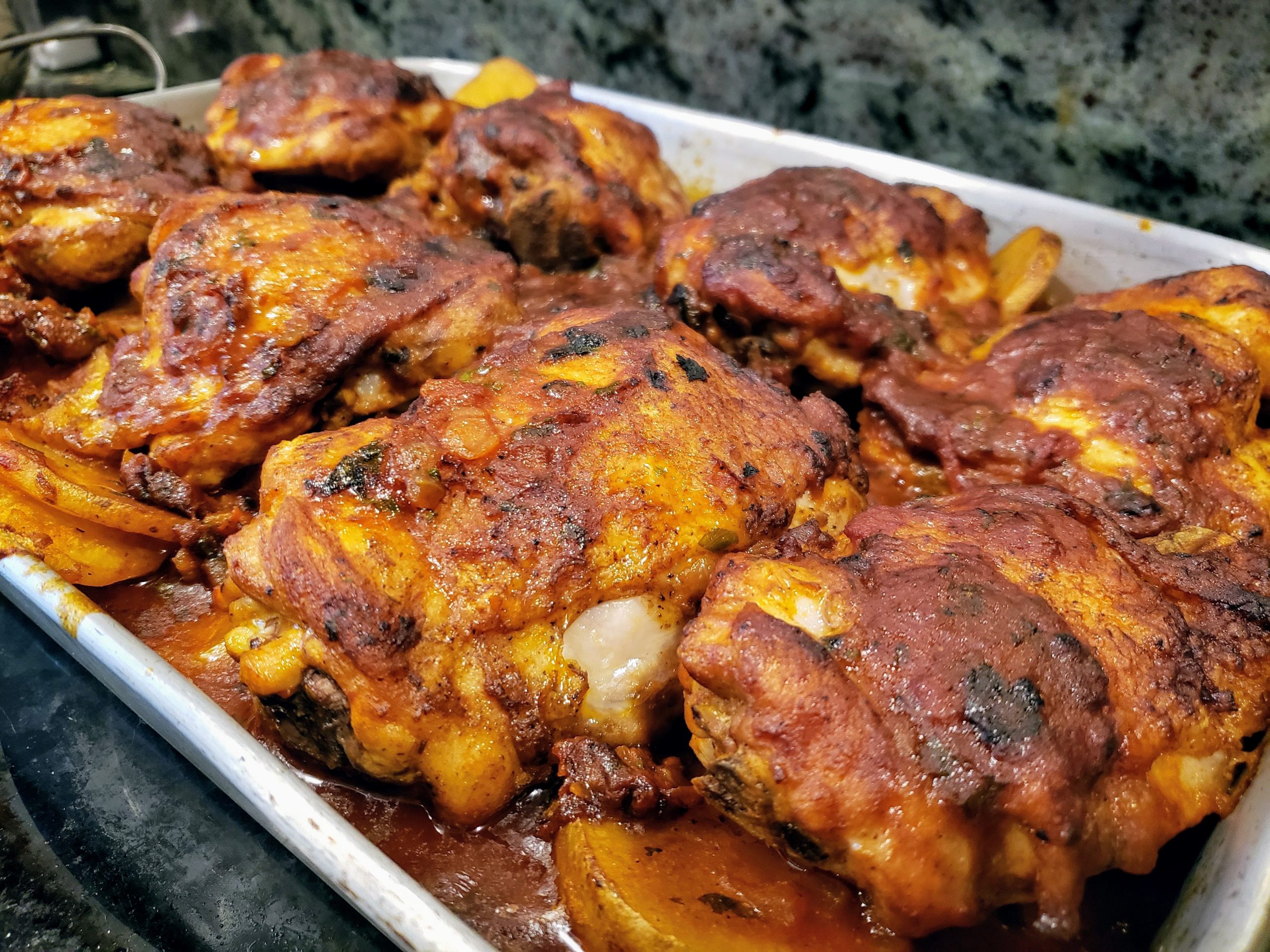